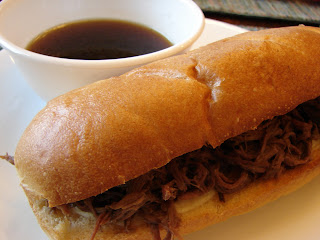 I love French dip sandwiches at restaurants. I just think they are the perfect sandwich and the au jus is so fun. But I had never tried to make them at home. Until today. This recipe is awesome - it's from Real Mom Kitchen. The meat is so tender and flavorful and it's so easy to make. Even my 4 year old loved this sandwich and had fun dipping it in the au jus. Ooh ooh, and the melted provolone on the toasted hoagies rolls makes it SO good. This recipe is a keeper.

In a crockpot combine soy sauce, water, garlic, rosemary, and bay leaves. Place roast in the crockpot. Cook on low for 8-10 hours.

Remove roast from crockpot and shred the meat. Strain liquids/au jus from slow cooker into a large saucepan. Add shredded meat back into the crockpot with enough au jus to moisten the meat.

Place sliced hoagie rolls on a baking sheet. Spread halves with butter and place into middle rack of oven set to broil.  Broil until rolls start to toast. Place provolone on the rolls and broil until cheese is melted and bread is golden. Serve meat on the rolls with au jus for dipping.
Posted by Jenni at 8:27 PM