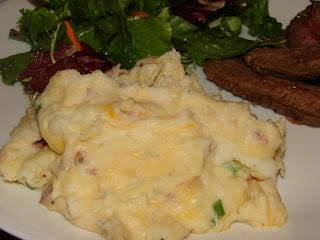 I love smashed potatoes or loaded mashed potatoes as they are sometimes called at restaurants. Here's my at-home version (which is yummy if I don't say so myself). Really though, how can you go wrong with mashed potatoes and cheese and bacon. What a delicious and naughty combination.

Cut up potatoes and cook in boiling water until cooked through (over cooking the potatoes just a little makes for fluffier potatoes). Drain. Place cooked potatoes in the bowl of an electric mixer. Add melted butter, half and half, and sour cream and mix with paddle attachment until potatoes are broken up. Turn up speed and mix until potatoes are smoother, but still a little lumpy. Mix in by hand: cheddar, green onions, bacon, and salt and pepper to taste.
Posted by Jenni at 3:22 PM