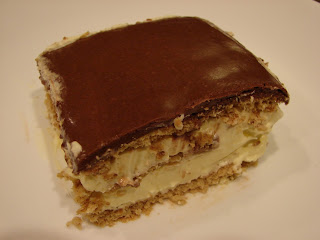 I'm reposting this dessert because it has changed a little over the years and this is the way I always make it now. It's such a favorite and so tasty. It really does taste like an eclair casserole! My youngest thinks it's named after her because she thought I said it was "Clara Dessert" instead of eclair dessert, so we just call it Clara dessert now.:)

Line the bottom of a 9x13 baking dish with a single layer of graham crackers.

Mix all ingredients together in a saucepan and bring to a boil, stirring, for 1 minute. Remove from heat and cool a little before spreading over the eclair dessert.
Posted by Jenni at 7:43 PM

Have you ever tried to freeze this and use it later? Looking for Freezer meal options.

I haven't ever tried freezing this. I wonder if it would work. I would worry that the pudding would turn runny when thawed, but you could always try.

Just thought I'd let you know that this freezes BEAUTIFULLY!!! It didn't turn runny or change in any shape or texture. It's definitely on my freezer meal plan next time!
Melissa-Madison, WI

Yay! I'm so happy to know it worked!