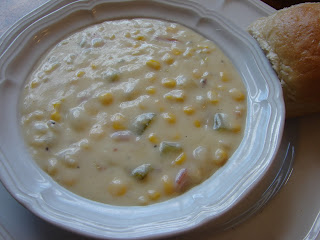 I'm posting this recipe again because I've updated it and I like it even better now. It is the perfect corn chowder, to me anyway. I took out the carrots and added more celery. I also added more bacon and if you want even more bacon flavor, follow the cooking note at the bottom of the recipe. I also changed the method, cooking the veggies first in butter, which I think is the key to a really good soup. This is my oldest daughter's favorite soup and she requests it all the time, even in the middle of summer! It's just that good. I hope you like it too!

In a large soup pot melt 3 tablespoons butter. Add onion, celery, and bacon pieces and saute until vegetables are softened. Add garlic and cook another minute. Pour in 4 cups of chicken stock. Add potatoes and corn. Bring to a boil, then turn down heat to medium and boil for about 15 minutes or until potatoes are cooked through, stirring occasionally.

In a saucepan melt 1/2 cup butter, add flour and cook, whisking, for about 2 minutes. Add half and half slowly, whisking, and cook until thickened and just starting to bubble. Pour this white sauce mixture into the soup pot. Add can of creamed corn, remaining 2 cups of chicken stock, salt, onion powder, cayenne, pepper. Bring to a boil and heat through. Thin as needed with milk. Season again with salt and pepper and serve.

**As a note: If you want this soup to have even deeper bacon flavor, which makes it fabulous, use 8 strips of uncooked bacon at the beginning. So instead of melting the butter first, cut up the bacon into small pieces and put that in the bottom of the soup pot to cook and render out the fat. Once it is cooked remove the bacon pieces to add back in later, leaving the bacon fat at the bottom of the pot. Add a couple tablespoons of butter and melt, then add the onion and celery and saute until softened. Then add back in the bacon, add the garlic and cook for a minute. Then follow the directions above from that point (next you'll add the chicken stock, and so on). I don't always do it this way because a lot of times I buy big packages of precooked bacon from the freezer section of Costco, but when I make it with uncooked bacon I love the flavor even more. 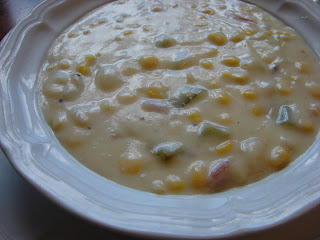